By half past eight, when the Deputation was destroyed, there may have been a crowd of three hundred people or more at this place, besides those who had left the road to approach the Martians nearer. There were three policemen too, one of whom was mounted, doing their best, under instructions from Stent, to keep the people back and deter them from approaching the cylinder. There was some booing from those more thoughtless and excitable souls to whom a crowd is always an occasion for noise and horse-play.

Stent and Ogilvy, anticipating some possibilities of a collision, had telegraphed from Horsell to the barracks as soon as the Martians emerged, for the help of a company of soldiers to protect these strange creatures from violence. After that they returned to lead that ill-fated advance. The description of their death, as it was seen by the crowd, tallies very closely with my own impressions: the three puffs of green smoke, the deep humming note, and the flashes of flame.

But that crowd of people had a far narrower escape than mine. Only the fact that a hummock of heathery sand inter- cepted the lower part of the Heat-Ray saved them. Had the elevation of the parabolic mirror been a few yards higher, none could have lived to tell the tale. They saw the flashes and the men falling and an invisible hand, as it were, lit the bushes as it hurried towards them through the twilight. Then, with a whistling note that rose above the droning of the pit, the beam swung close over their heads, lighting the tops of the beech trees that line the road, and splitting the bricks, smashing the windows, firing the window frames, and bring- ing down in crumbling ruin a portion of the gable of the house nearest the corner. 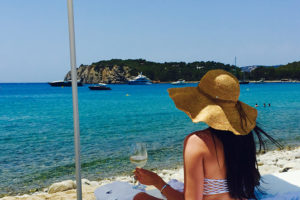